The penultimate volume in the Ravanmark Saga…

Alannys and her friends have finally set out to perform the acts that will prove her–or ruin her–for all time. With Baronet Athniss hunting them, they arrive at last at Mount Mouseion. But they discover more among the ruins of the Spire of Glory than simple murder. The ancient monument conceals many secrets, some of which could change the world as they know it.

Unanticipated consequences of the acts of the Redeemer throw Alannys and her dearest friends into mortal jeopardy. As they close in on the Lord’s Retainers and those who seek to ‘bring the power of the few to the many,’ they discover an even bigger threat lurking in the shadows–a threat vast beyond imagining.

Join Alannys and her friends as they fight to save each other, Ravanmark…and the world.

Book Four of the Ravanmark Saga, Acts of the Redeemer, is live and available for purchase at all major retailers! If you’ve been waiting to start the series, book one, The Music Mage, is still free and waiting for you to check it out.

Links to Acts of the Redeemer:

Links to The Music Mage:

Ravanmark is a really fascinating place to me (I hope it is to you too!) Even after several years and several hundred thousand words, that continues to be so. I hope it is always so.

What I never expected was how surprising it would be to me to see the things that have influenced its creation.

I have a fairly intensive revision process. Part of that process involves marking out the things about the story that are important to me on a high level, the things that matter, the things that these stories are really about. (At least to me. It’s entirely possible that no one else reading these books will ever see the same things in them that I do, and that’s perfectly fine. It’s part of what makes fiction so wonderful.)

Perhaps because I am nostalgic and reflective by nature, when I work on revising any of the books in this series, I have a tendency to look back over the revision notebooks of previous books. Sometimes I am surprised to see what I have written there–surprised to see things jumping out at me that I don’t even remember writing down.

They are the philosophies that underlie Ravanmark–every person who lives there and every thing that happens there. And in the hope that someone else might find them as interesting as I do, I lay them out here, as they were originally written in my notes.

The power of humans to create is sacred–I wrote that for the first book, and it still applies. But more than that, life is sacred, living is sacred, and how we do it matter. We matter–each of us, all of us, and we are all valuable and deserving. Too much time is spent sectioning us off into various categories and then denying some of them–whether it’s because we think they are less than us and look down on them, or because we think they are more than us and fear them. All people deserve to live in peace, and to make use of their abilities however they choose, without impinging on others’ freedoms. There are no people who are somehow less human than others.

This makes me reflect on several things in Ravanmark, from the rather feudal class structure to the treatment of the Singari. What about you?

Freedom and equality aren’t just pretty words–they are fundamentally necessary for humans to achieve their full potential, as individuals or as a species. And the thing about them is that they go hand in hand–you only have freedom inasmuch as you have equality, and you can’t be really equal if you aren’t free. And if people around you aren’t free or equal–don’t think you are, either.

Again, I think of the Singari. And of the class structure…it seems to me that freedom and equality are not just issues for the disadvantaged, but for the very powerful as well. How free is a king, really? How equal is he? How much of his ordinary life–if he even can be said to have one–suffers for the demands of his position? And if he is an unjust king, how much do the lives around him suffer for the power of his whims?

Those are just a couple of items I came across while I was flipping through old notes. I’m sure there are many more waiting to be re-discovered; if I find them, I’ll try to keep them all in this category, with the Philosophies of Ravanmark tag.

Haven’t checked out the series yet?  Now is an excellent time to dive in–The Music Mage is currently on sale for 99 cents to celebrate the new addition!

THE HERO’S JOURNEY GETS BUMPY…

While Ravanmark buckles down for civil war with the Dark Alliance and their supporters, King Dorramon has been playing a dangerous game with Cadenda, refusing to hear their requests to honor his engagement to their princess, buying time for his forbidden love with Alannys. With international war threatening, tensions are high and fuses are short.

Alannys is traveling the country with the itinerant Singari, continuing her mission to build support for Dorramon and promote public acceptance of the Talents. After a deadly journey through Eversnow Pass, they come down on the other side of the Cloudytop Mountains into Orinthal Holding–only to find the real trials have just begun.

Join Alannys as she faces her most grueling tests yet, losing everyone and everything she ever cared about, in the continuing battle for the future of Ravanmark, the love of her life–and herself.

Check it out on Amazon.com!

Book Two in the Ravanmark Saga was just published yesterday: Redeemer of the Realm!

Danger closes on every side,
And the world awaits a legendary hero…

Just when Alannys thought she had earned a little peace at the Great Palace, Lord Malrec and his Dark Alliance stood at Dorramon’s coronation and declared war on the new king. She’s known for a while that Dorramon has some bad news for her, but she’s unprepared for just how bad.

But it’s the midnight attempt on her life that spurs her to action–Ravanmark is imploding around her, and she can’t just sit and watch it happen.

She knows she caused it, after all.

And what of the prophesied savior, the legendary Redeemer? Time is growing short, and the songs of the Redeemer have yet to be found. Alannys will have to take her fight for Ravanmark’s future across the country on her own, while Lord Malrec continues his work on the magical device that will enable him to safely hold her prisoner, and use her as a weapon to destroy the king she loves.

Join Alannys and her friends again as they continue their epic fight for the kingdom of Ravanmark–because sometimes ‘happily ever after’ has to wait.

Amazon paperback: Redeemer of the Realm

Other outlets coming soon–I encourage you to follow my Facebook Page for updates as they become available.

The Music Mage, Book One in the Ravanmark Saga, now has a pretty spiffy trailer:

I spent last night rolling out new versions of The Music Mage to all retailers and distributor outlets.  I was busily working on book two in the series, and needed to refer back to the text of book one to look up a detail.  As I was reading what I needed, I discovered that the originally posted version of Music Mage describes the Great Hall as having a red carpet up the middle, and red carpet on the dais.

I do apologize for the error.  Corrected versions should be available at all the retailers in the next few days.  Of course you are always welcome to contact me, and I will be happy to send you the corrected version as well. 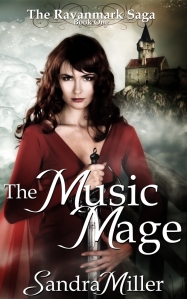 Just a quick note today to let you know the first of the other major retailers has picked up The Music Mage in ebook.

It’s now available in Apple’s iBookstore!  Click the cover to check it out.

It did show up yesterday in Barnes & Noble, but that is the paperback version.  For some reason, the ebooks seem slower to distribute.  Kind of counterintuitive, isn’t it? 🙂

The Music Mage made it up to #30 on the Hot New Release List at Amazon for Epic Fantasy the day after its release, so I encourage you to have a look!

I’d like to direct everyone’s attention to the Amazon Hot New Releases list for Epic Fantasy, where you will find The Music Mage currently occupying spot number 47.  This is a great achievement for a book that’s been out less than 24 hours!  Thanks everyone for your support, and I’m really looking forward to hearing what you thought of the story!

Find out first about new releases in the Ravanmark Saga. Get email notifications of new releases--join the mailing list!